The artistic maturity, dedication and desire to overcome Antonia Contreras have been developed in parallel with its activity in the Flemish environment, an outstanding artistic side soloist with orchestras and choirs and is required both for his talents as an interpreter of the purest flamenco as its artistic identification with Spanish classical music popular.Con root Antonia Contreras offers this versatility:

Antonia Contreras presents a series of productions currently available according to schedule of various dimensions and issues that are detailed in the dossier that you can download it in pdf:

Proposes a flamenco repertoire varied and rich in lesser-known songs, which the singer often rescues from oblivion. Antonia Contreras Malaga Chaparro acts with the touch.

Its broad melodic arc has enabled him to become a singer long, deep voice and able to approach the flamenco a dual behavior exquisite combines respect for tradition with the externalization of one’s personality.

We invite you to see a sample on the following links:
Vidalita | Cantes de Málaga | Tientos-Zambra

Poetry Flamenco sounds: the 27 and its surroundings 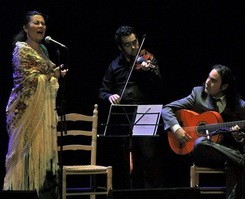 This is a selection of poems by authors from 27 predominantly, which have been little to music or sung in the world of flamenco. Texts León Felipe, Luis Rosales, Emilio Prados, Salvador Rueda, Angel Gonzalez, Concha Mendez and Jose Agustin Goytisolo among others.

This show was commissioned by the 27th meeting of Poetry of Almagro, and premiered on October 28, 2011 at the Theatre de Almagro. 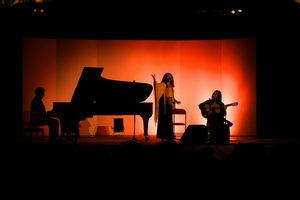 JEAN-FRANÇOIS comprehensive heisser Iberia revisits. Stop presenting this work will accompany the singing ANTONIA CONTRERAS, and one of the brightest Spanish guitarists of his generation, MALAGA CHAPARRO. Instead of hitting a flamenco recital and piano, the songs and Spanish repertoire pieces are integrated into the course of the notebooks of Iberia, chaining with Albéniz to locate spare pianistic evocations of traditional forms mirror of their models, from a cappella prayer to flamenco, to sevillanas flamenco guitar virtuoso …

Antonia Contreras has been required to perform this work in its orchestral version in more than 40 occasions des 2005, and has performed several times in both version 1915 and 1925, with various orchestras and conductors obtaining international recognition the press and the public. 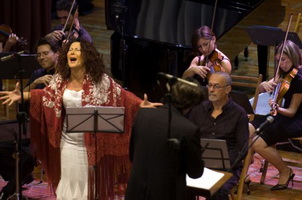