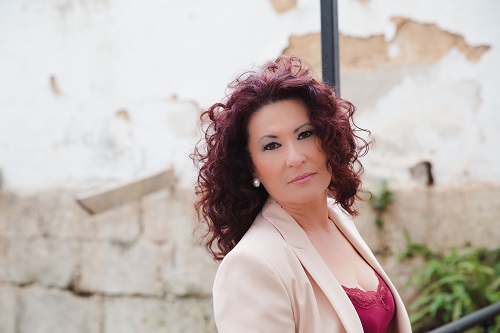 Antonia De la Cruz Contreras, artistically known as ANTONIA CONTRERAS, is a flamenco singer from Malaga with all the consistency of a self-made artist. She began to sing at an early age and embarked on a professional career which, after temporarily renouncing, she resumed towards the end of the 1990s with the absolute conviction that flamenco singing was her true vocation, a source of fulfilment she would passionately pursue. The personal maturity and knowledge she gained during her time away from the stage helped her to realize her great potential and to become an extremely solid and deeply expressive artist embodying all the essential elements of traditional flamenco culture.

Antonia lives in Álora, which is undoubtedly instrumental in her being regarded as a key figure in the field of traditional fandango-style Malagueñas. Her versatility and quality, as can be seen by the prizes she has been awarded, make her a unique artist who is also outstanding in her performance of other flamenco styles (palos) such as soleás, siguiriyas, tangos, rondeña, cañas and cartageneras.

Among the many distinctions she has received, most noteworthy are the national flamenco singing awards in the Peteneras (1999) and Serranas categories, numerous prizes for Malagueñas, Best Flamenco Singer (2003 and 2004), the Urique Competition Prize (2004) and several awards for saetas, in addition to many other regional distinctions.
She is a singer with a constant impulse to learn and assimilate the echoes of the old flamenco masters (she is a great admirer of Niña de los Peines and Tomás Pavón) and a wide melodic range. She tirelessly strives to renew the lyrical nature of flamenco singing, adapting both the lyrics of new authors and the verses of Andalusia’s most outstanding poets to a repertoire which is also characterized by songs she has rescued from oblivion.

She has also participated in large international productions such as Manuel de Falla’s El Amor Brujo with over 40 performances to date. The production, in its orchestral version, has toured world-wide and has featured prestigious orchestras such as the Malaga Symphony Orchestra, the Lisbon Metropolitan, the National Orchestra of Colombia, the Caldas Orchestra (Colombia), the Petrobras Symphony Orchestra (Brazil) and the Bulgarian Youth Orchestra. In France, the production featured the Picardie Orchestra, the Pau Orchestra, Orchestre d’Auvergne and, on a more regular basis, the Poitou-Charentes Orchestra, with which she performed in the Basque Country, France and Japan. It was also with the Poitou-Charentes Orchestra that she recorded the 1915 version of the piece for the MIRARE record label under the baton of Jean-François Heisser.

In the framework of the Malaga en Flamenco Festival (2005-2008), she participated in the Málaga productions performed at Andalusia’s leading theatres and a show entitled Biznagas which was presented in Catalonia, New York and London. In 2008, she co-starred in the flamenco version of Albéniz’s Iberia Suite together with guitarist Chaparro de Málaga and pianist Joan François Heisser with over a dozen performances in cities such as La Roque d’Anthéron, Paris (Théâtre de la Ville), Aix en Provence and Arles, among others. She also co-starred in the production Cruce de caminos(Crossroads), a compilation of rarely performed flamenco-heritage songs, which toured leading venues in Andalusia. Also noteworthy was her performance of the Flamenco Mass at Cartagena de Indias Cathedral (Colombia, 2008) and the creation of her own show Sin Fronteras (Without Borders) which was premiered at the Teatro Cervantes in Álora (2010). She also participated in the Bicentenary programme to celebrate the independence of South American countries, together with the Coral Càrmina and the Atientas choir, in Barcelona and L’Arboç with the support of Barcelona’s Casa América, with a performance of the Misa Criolla (Creole Mass) and Ariel Ramírez’s Christmas carol series Navidad Nuestra, among other pieces. She also starred in a show entitled Poesía suena a Flamenco: el 27 y su entorno.

In 2012 she recorded, together with other artists from Malaga, a CD entitled Cantes de Málaga, published by the Federación de Peñas Flamencas (Federation of Flamenco Social and Cultural Clubs). In addition to the aforementioned recording of Falla’s El Amor Brujo, published by the MIRARE record label, she also recorded an album in commemoration of Salvador Rueda´s 150th anniversary (Málaga, 2007) and a DVD featuring works by Isaac Albéniz which was recorded at Paris’s Théâtre de la Ville in 2009.

In 2012, she performed Falla’s Amor Brujo with Colombia’s National Symphony Orchestra and the Malandain Ballet of Biarrtiz in February 2012, the Orchestre de Pau, Orchestre Picardie and the Caldas Orchestra. She gave flamenco concerts in Madrid, Cadiz, Malaga and Granada and a concert fusing Colombian and flamenco music in Manizales (Colombia). In 2013, she has performed at the Folle Journée festival in Nantes, the Music-Musika festival in Bilbao (with the Orchestre Poitou Charentes) and in Tokyo (with the Orchestre d’Auvergne) and has also given flamenco performances in Barcelona (El Dorado), Cáceres, Álora, Biwako (Japan) and Florence (Italy).

Her artistic maturity, vocation and desire for self-improvement brought Antonia Contreras to develop a parallel career as soloist for orchestral and choral ensembles, besides to flamenco singer one. She is required for her performing pure flamenco gifts as well as a reference singer of the classical popular music with folk roots. This versatility allows Antonia Contreras to offer: